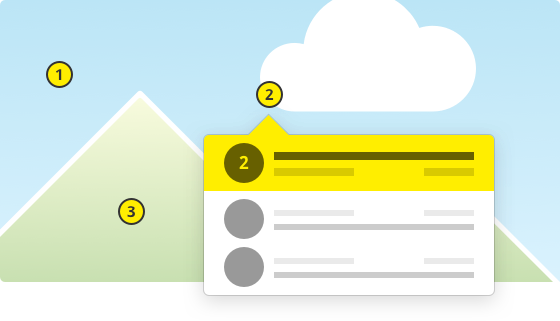 We're really pleased to announce that our first take on the image proofing feature is now available to The Brave Collective: in case you don't know already, it's those users that get to use upcoming Apollo features before everyone else; they help shaping the feature and – of course – may suffer from the occasional newly introduced bug!

What is image proofing?

Image proofing in Apollo lets you add graphic annotations directly on project image files by placing nice yellow dots directly on the relevant part of the image, from which you can start a discussion and later resolve the issue. All major image formats are supported.

Even though we already have quite a few improvements planned for the image annotation feature, we really wanted to get it into the hands of The Brave Collective as soon as possible, because their feedback has always been very effective to improve the final product!

I hear you say: “Hey, what about the rest of us?” Don't worry and read on!

What everybody gets today

With image proofing taking most of our efforts, we still managed to sneak in a couple new features that come straight from requests from our users! Thanks to Christine L., William P., Roberto S., Bessie T., Qi Hao X., Georgia D. and Ronald K. for suggesting the two improvements described below.

Visible day range for the calendar

Even though remote work is all the rage these days, teams with all users in the same time zone expressed their need to hide all those empty hours – usually from midnight to 8am and from 6pm to midnight – in the main calendar's day, 4-day and week views. Well, there's now the ability to do just that: go to Settings > Preferences and select when your day starts and ends.

Default setting for “Let everyone see this task”

Once upon a time, we decided that tasks on the CRM side of things in Apollo, by default, were visible only to those who created or who were responsible for it, and provided the “Let everyone see this task” checkbox to override that, task by task.

But what happens when some teams always use it the other way around and explain their use case to the Apollo support? Well, you guessed it: there's now a new personal preference just for that. You'll find it in the Settings > Preferences screen as usual.

That's it for this week, thanks for reading!