Results of the first poll

It's over! After running for 10 days and receiving thousands of votes, the first Feature Poll has ended. To be honest, we didn't expect all this engagement; it's a sign that Apollo users care about the app.

Here are the results: 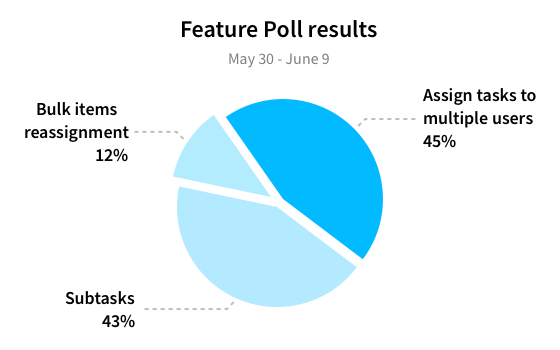 As you can see, Assign tasks to multiple users won, with Subtasks second by a hair, and Bulk item reassignment third by a long shot.

Looking at the results above, we see the Subtasks feature as equally desired by part of Apollo users. If you're one of them, don't despair; while we're going to put our major efforts to deliver the winning feature, support for subtasks will come in the near future as well. Remember: most of the features we are going to put in these first polls are usually in a late stage of development, and we just need an hint to know what to refine and release first – that's what Feature Polls are for!

Wheter you cast your vote for the last poll or not, vote now for the new one. New points are awarded every Monday (if you missed the announcement, you can find it here).