Make use of tasks’ start date

A few weeks ago Tasks received the ability to have a Start date, anticipating a future Gantt chart feature. Since then, the Start date has been left in a corner; you couldn't do anything with it, except knowing that a task had this date set and act accordingly.

Today we want to start taking advantage of it.

First, you can now sort tasks by their Start date. This will put earlier tasks on top and help you to prioritize them better. 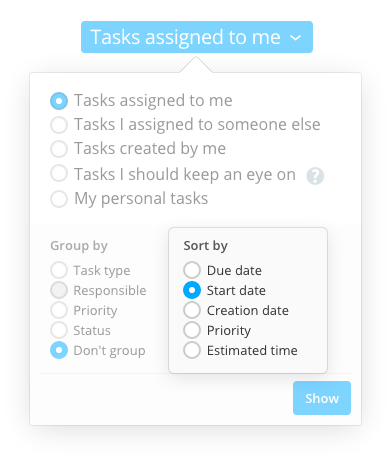 While we were at it, and since other users already asked for this one as well, we also added the ability to sort by creation date.

In addition to that, you can filter tasks by their Start date. This means that with a couple of clicks you could, for example, see all tasks that should have started already, but didn't, or see only tasks that need to be on your focus starting next week. 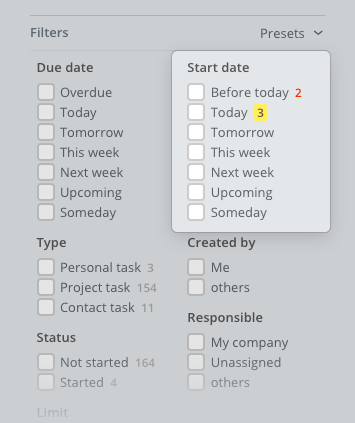 Also don't forget that now you can save your favourite filter sets by using the Filter presets feature we released last week! So what are you waiting? Go ahead and create your “Tasks that should be started but are not!” preset! Blaming fellow coworkers has never been easier :-)

Thanks for being a part of this

Thanks to all those who submit their feedback and feature requests. Please keep doing that, we love it! If you didn't already, what are you waiting? We are a very approachable team :-)

As usual, you'll find a list of all changes below.