Appearance customization extends to all users

It's August, and it's hot outside, at least here in Italy. Luckily for us, technology advanced so much that we now have these amazing things called air conditioners, so that some of use can keep working on Apollo and bring you new features while the rest of the team is on the beach!

A few weeks ago, the new sidebar made its way into Apollo, and introduced the ability to set a background image. Suddenly, owners could customize their workspace even more than they thought.

The sidebar background, though – just like your phone's wallpaper – is very subjective stuff; inevitably, users started asking to select a different background than the one set in their workspace, even if they were not the owner of that workspace.

So today you can do just that: click the Gear button in the bottom section of the sidebar, select Settings, then click Custom appearance and set your personal appearance options for the workspace. That includes the application style and theme, and the sidebar background image. 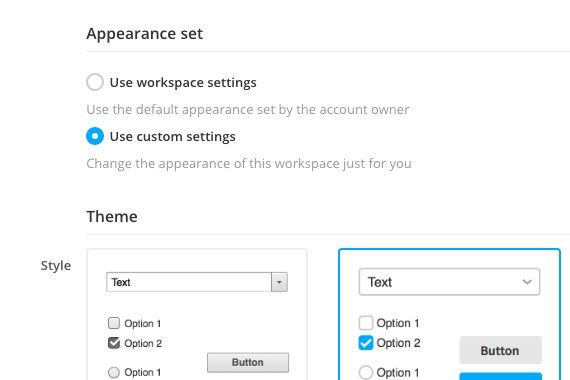 Workspace owners needn't worry, though. We're aware that some companies want a strict control of their branding, so we also provide a lock switch that prevents users from changing their own appearance settings for the workspace. To enable the lock, just open the Appearance page in Settings, scroll down to Appearance control, then click Locked.

That is all for today's update, we're looking forward to the next one.