Welcome to another Apollo update. This one is all about requests we received often in the last few months.

The first (and most substantial) one is the ability to merge two projects into one. While we at Applicom never needed the ability to do such a merge, we can still appreciate that sometimes, in bigger and/or busier agencies, two people may start the same project for the same customer, ending up with a bunch of tasks in one project and a couple of messages and a writeboard in the the other one. Or, it could be just a matter of simple projects housekeeping: two internal projects grew in scope and are now basically overlapping, so you'd better merge both into one.

One of our users, John K., asked for it a few times, and he wasn't alone.

Well, starting today, merging two projects is possible! You can do so by opening the Project settings page and clicking the Merge project button on the right side of the screen 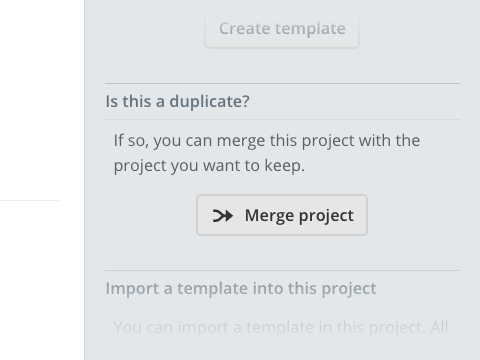 When the Merge project dialog box appears, search for the project you want to merge the current one into, then click Merge these projects. 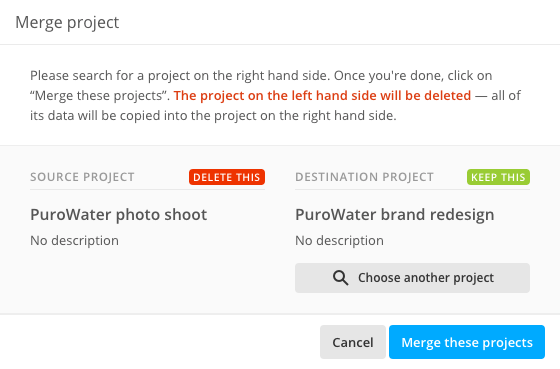 All data from both projects (tasks, milestones, messages, etc.) will be merged into one, and even though you don't need to do anything else, we suggest to have a look at the People and permissions page on the final project, to make sure that its members all have the right permissions set.

Back to requests by our users

Among the new features that let you be more productive, there are new sorting and grouping options in the project list (which can now be set independently from each other), and the ability to choose a project manager while creating a brand new project.

Thanks to Victoria B. for the former and Phoebe D. for the latter.

Well, that's all for today, we look forward to the next update.