This week we'll talk about the deal list refresh, the ability to filter deals by Close date, and the new writeboard archiving feature. 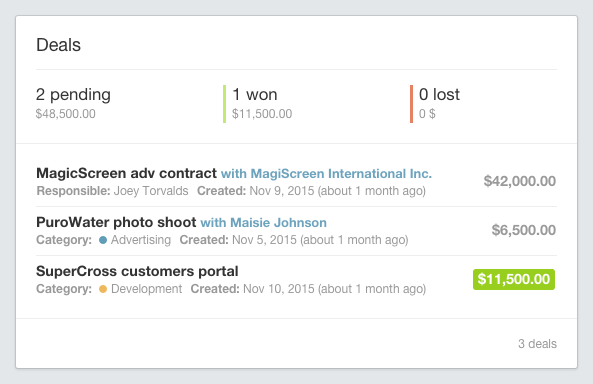 The deal list went through a light redesign: the old three separate views (Pending, Won, Lost) have been unified into a single one, and the ability to filter by status has been added to the Filter panel.

Speaking of filters, you can now also filter deals by Close date. This will help those users who want to focus on how many deals were won or lost in a given period.

Another small addition that will help those of you with long-running projects is the ability to archive writeboards. Sometimes a writeboard is not relevant anymore but, of course, you don't want to delete it. By archiving it you can keep your list tidy while retaining the ability to retrieve it anytime.

Just a few hours after we rolled out the Subscription to deal updates feature, some of you who started playing with the new toy noticed that the notification email got somewhat noisy when multiple changes to the same deal were made.

To fix this, deals that went through those changes are now mentioned only once in the notification email, which is now sent less frequently than before, at most once every two hours – Guido, Robert, Tania: this is for you 😀.

So keep your feedback coming. Drop us a line at contact@applicomhq.com with your thoughts. Don't be a stranger!

While the work to make Deals a stronger feature in Apollo will certainly continue, now we are doing the finishing touches to release a redesigned project overview screen. We are sure you'll love it, so stay tuned.

If you'd like to follow the development of Apollo more closely, keep following this blog, which is also available as an RSS feed.