Timer improvements and a new poll

In our last post, we introduced the new Timers, which brought a flat user interface, keyboard support and more. Unfortunately, they've had a bumpy start; we found a bug related to timezones, which we fixed the next day and pushed it for everybody to use.

While we were there, we also added some features that we initially planned for later; specifically, you can now: 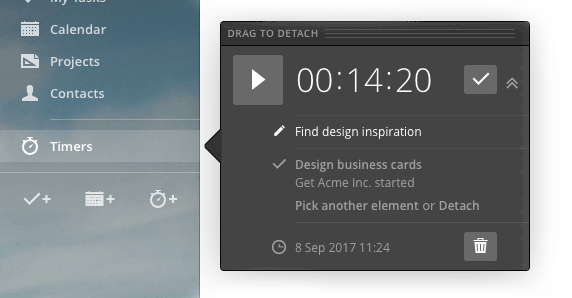 Also, the Timer creation date, which was shown in a tooltip in the previous Timers but gone in the redesign, is now back and visible at the very end of the expanded Timer.

Some users were also worried that the Timer description didn't default anymore to the name of the task the Timer was started on, so we brought back that as well.

A new poll has just started

Which new feature would you like to see first in Apollo? The contenders in this poll are:

Whether you cast your vote for the last poll or not, use your points to vote today! New points are awarded every Monday (if you missed the announcement, you can find it here).

That's all for today. Remember that all of this couldn't be possible without your feedback, so keep it coming, we love it!